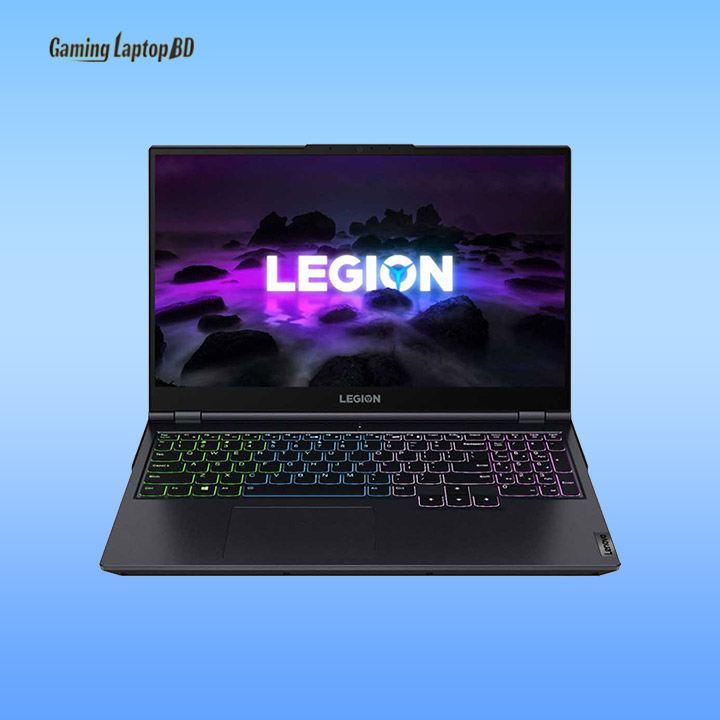 The chassis of the Legion 5 is similar to that of its predecessors, but it looks more stylish due to the combination of the Phantom Blue Hood and the Legion Prismatic logo in the upper corner of the corner.

The interior uses the same Phantom Blue shell and a four-zone keyboard with RGB lighting, which flows from left to right, just like a rainbow ocean hitting the coast. There is a small touchpad below and a power button above the keyboard.

The display bezel is relatively thin because the webcam is located in the notch where the top bezel is. Measuring 14.3 x 10.2 x 1 inches and 5.3 pounds, the Legion 5 makes it even thicker and heavier for gaming laptops. We have seen gaming laptops shrink to 0.7 inches and weigh less than 5 pounds.

The Legion 5’s bottom transmitter is surprisingly loud, but it has a strange balance problem. The volume is high at 10% and it hardly gets louder when I set it to 100%. However, this can be a pre-production issue. I heard “Demon” by Icon for Hire, the introduction of electronic beats was loud and daring, but the electric guitar and drums sounded a bit muddy. However, the voices are crisp and take center stage.

Unfortunately, the bass is not round enough to set off the percussion. You can customize the audio through the Nahimic application to adjust the sound to your liking. It has surround sound, volume stabilizer, vocal, bass and treble settings. There are also four presets: music, movies, communications, and games.

Starting from Legions 2019, the keyboard has been redesigned and is one of the best designs in this segment, with a full-size keyboard main panel, a smaller numeric keyboard part, and favorites Appearance, large and moderately oriented key.

This is what you want in any gaming laptop! In addition, the implementation uses the dimpled key feature of Lenovo notebooks, but they feel a bit cheap, and the touch is not as good as more advanced models. The feedback is also not surprising, but on a more fluffy aspect, which affected my overall accuracy.

At the same time, this is a fast and fairly quiet typewriter. Mine is an RGB model with bright and uniform lighting, but a lot of light is filtered under the buttons in this layout. The touchpad is a medium-sized plastic surface that is very smooth and very suitable for daily use. It’s again an upgrade from the previous generation Legion, but don’t expect it to work or feel the same as a premium glass trackpad. As for biometrics, there is none on this laptop.

The Legion 5 performs well, but my expectations for a laptop equipped with a Ryzen 7 5800H octa-core processor and RTX 3070 will not be inferior to the GPU, 16GB DDR4 RAM, and 8GB VRAM. Completed the Expert Review 4K Media Benchmarking Test in a short amount of time and scored 284 points. This is worse than the Core i7-based TUF Dash F15 (194), but not as good as the AMD 5800H / RTX3060-equipped Acer Nitro 5 (323). In gaming benchmarks, Legion 5 averaged 61fps in Hitman 2’s benchmark and 68fps in Shadow of the Tomb Raider.

The latter is done with ray tracing on, DLSS off, and all other graphics are set to the highest level. Finally, we run Wolfenstein: Youngblood under

The first is Lenovo Legion AI Engine. According to Lenovo, it is “an artificial intelligence solution system that can dynamically switch power between CPU and GPU for higher FPS.” Yes, this is a frustrating blur.

Description, but no matter what it is, it seems to be different. The second string bow of Legion 5 is an efficient cooling system. Although fans are quieter than most gaming laptops, they can exhaust hot air well even when running at full speed.

Put your hands next to the vents on both sides directly in front of the hinge, and you will really feel strong hot air coming out.

The continuous read and write performance of the SK Hynix SSD was 3,137MB / s and 2,712MB / s, which once again surpassed anything a direct competitor could achieve. It is very impressive for PCIE Gen3 x4 drives. If it is the former, it will be easier to explain the reason for the poor performance in our video schematic test.

Runtime is only 7 hours and 32 minutes, Legion 5 is well below the average level of similar laptops. Asus TUF Dash F15 has almost double the 90 Wh battery. Although the 300W power module that comes with Legion 5 is 600g, you can also use a Type C charger of 65W or more output to charge, or use a Type C 45W charger to charge when the device is off or on hold.

There are no reviews yet.